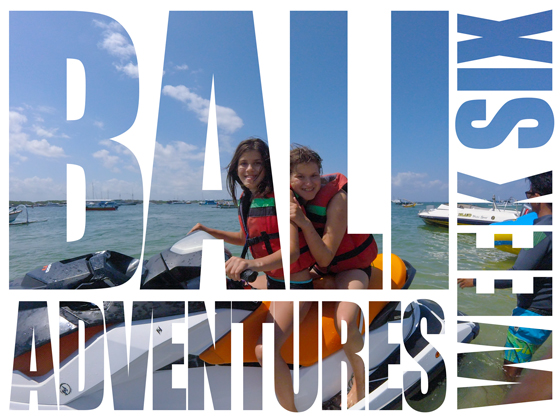 We’re back! This is the last Bali Adventures post, from week six.

As you may recall, the boys had to leave a week before us girls. We were sad to see them go, but super excited to embark on some girly adventures – namely, shopping and the spa.

We kicked off the week with a trip to Gold Island for some watersports.  We had never tried parasailing before, and it looked like fun.  The girls and I opted for a package that included parasailing, a jetski ride and a group tubing adventure.

The first thing we did was the parasailing. We jumped on a boat, and it drove us out to the middle of the sea, where we met up with another boat.  As if it was a completely normal thing to be hopping from one boat to another in the middle of the ocean, we soon found ourselves aboard a ship with three nice guys on it. I could tell for sure, but I think their full-time job is dancing on this vessel amidst strapping people on to the parachute. In any case, they appeared to be having a grand time, techno beats blasting.  They harnessed us in and up we went!

It was amazing! It was a clear day, and it’s sooooo peaceful up in the sky. I could have stayed there forever.

Later that evening, we hit the strip of shops near our house for the day, and stopped in at a place called “Frankenstein’s” for a snack. The girls were getting tired, so I asked for the check.  After settling the tab, I went back to the table, to find it empty.  I found the girls a short time later….

Our next adventure brought us to an elephant safari. The girls spent the morning hanging out with the 31 elephant residents of the sanctuary, feeding them, and bathing them.  It was a very long and informative morning, filled with laughs and smiles from everyone!

Just after lunch, we made our way back to the villa. I was unusually tired, so the girls hopped in the pool while I napped.  I woke up a short time later, feverish, drenched in sweat, with a blinding headache.  I also felt chilled, and scared. I couldn’t even imagine what was happening, but I sensed it wasn’t great.

The next morning, it was even worse.  I found myself unable to get my temperature down one moment, and the next moment I was piling blankets on me trying to stay warm.  And the headache – I can’t even describe how terrible it was.  As a previous migraine sufferer, I was trying to identify if this was, in fact, a migraine – but I couldn’t quite put my finger on what was different about it.  The following day was a complete blur. I vaguely remember handing money to Camryn so her and Andria could get food.

I woke up some time on Tuesday evening feeling worse than before, and still feverish.  Groggily, I padded off to the bathroom to splash water on my face and brush my teeth.  It was at this time that I noticed my gums were bleeding.  I also came to terms with the fact that I needed a to see a doctor.

Now, initially, I was a bit frightened. After all, here I am in a foreign country, clearly very ill. I had absolutely no working knowledge of the medical system, but I felt a little short on options. I certainly wasn’t in any shape to board an airplane the following day.

I made my way to what was rated as the “Best Hospital In Bali” (thank you, Google reviews) and I was pleasantly surprised to find myself in a bright, clean, up to date hospital, complete with English-speaking nurses and physicians. Within the hour, I had received an initial diagnosis of Dengue fever, a common mosquito-transmitted virus that, although uncomfortable, had very little serious risks associated with it. I was given a very thorough examination, kept overnight for observation, heavily medicated, and made it back to the villa the following morning in time to pack up for our journey home.

We spent the last week getting re-settled into a nice home routine, recovering from jetlag and visiting with the friends and family we missed while we were away.

Overall, it was indeed a great adventure. Bali, we will be back 🙂